Maybe the title of this post should be “Best Vegetarian Restaurant in Vietnam”…or maybe in the world? I’m not ashamed to admit that I ate here for a majority of my meals while staying in the UNESCO heritage town of Hoi An. Let’s get to it:

I’m talking about Minh Hien (50 Tran Cao Van, map to the left).  Initially, the only reason I chose this restaurant (from this list of vegetarian restaurants in Hoi An) is because I had a vague notion of where it was. The reason I continued going there was the quality food, funny staff, and one adorable dog! (I didn’t know until later that Minh Hien is consistently in the top 5 Hoi An restaurants on TripAdvisor.)

Minh Hien is just a bit north of the Old Town (maybe 5 leisurely minutes by bicycle?); there are a lot of restaurants on the street trying to capitalize on this restaurant’s vegetarian vibe, but accept no substitutions–Minh Hien’s sign looks like this: 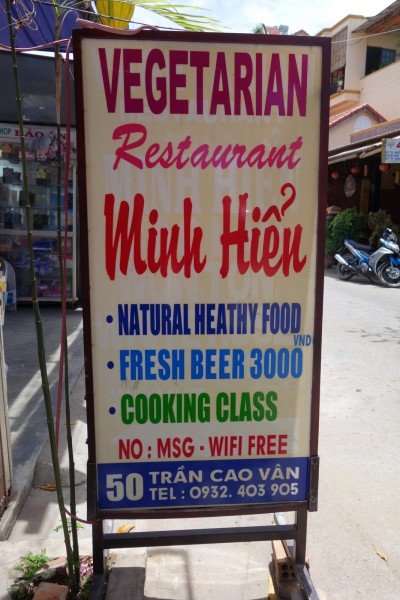 Start out with one of the set menus (I prefer the first one, for one person). You get to sample delicious veg versions of Hoi An’s local specialities, including white rose dumplings, cao lau noodles, fried spring rolls, and wontons.  For better or worse, there’s not a ton of fake meat on the menu (I happen to like it, and there are a few pieces that come on the cao lau and the white rose dumplings) but there are plenty of tofu options, including a fragrant grilled tofu stuffed with mushroom, onion and turmeric. The fresh pho noodles ($2) are deceivingly simple and the flavors (fresh mint, garlic, peanuts, onions…) meld together seamlessly.

The food is served ridiculously quickly and is insanely cheap. The huge set menu comes in at ~$5, although a la cart dishes like cao lau will only run you ~$1.50. They serve a local wine from Dalat that comes in at $1.50 a glass or ~$6 a bottle, and their fresh beer costs 3,000 VND—yes, that’s 14 cents.

Check out their website to get a taste of the family’s good humor:: “We are so lucky [be]cause we are the vegetarian restaurant. We think all animals will smile when [they] look at us. Except: sharks, crocodile, lion, panther or tiger… But we have never been next [to] them.”

Click through the gallery below to see some of the fare. Whether it’s a breakfast banh mi, a hearty lunch cao lau, or some dumplings and soup for dinner, vegetarians and omnivores alike will find something that pleases. Don’t miss their huge fruit juice selection (go for the fresh tamarind juice!)

*P.S.  Believe the hype about cao lau noodles, because there’s nothing like them! Soaked in lye water from local wells, they’re texture is reminiscent of buckwheat soba noodles and they have a dense, delicious feel to them.