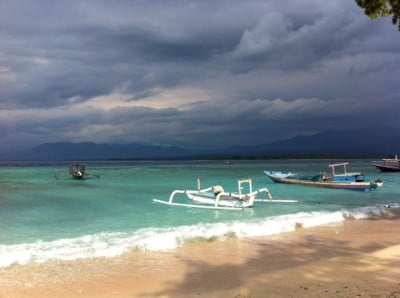 The beach in front of our homestay. Rainclouds were a common site over Lombok, but not the gilis!

(For an overview of the gilis, start on our original blog post by clicking here!)

We started our gili adventure on Gili Air, which we found (in retrospect) to be a happy medium between Gili Meno and Gili Trawangan.  We stayed on the northeast coast, a pleasant albeit long(ish) walk from most of the action on the southeast coast.   There are plenty of delicious warungs & restaurants lining the coast on this section of the island.  From upscale Scallywags to small family operations, we enjoyed our meals everywhere we went.  The Chill Out bar has a particularly good selection of fresh grilled fish & vegetable skewers for a great price.  We ended up at The Beach Club many nights because of the movies they played right on the beach; watching a James Bond movie with a Guinness and popcorn on the Bali Sea is as awesome as it sounds.

We took a snorkeling trip to all three islands through Duani at Cha-Cha Adventures.  This 6 hour trip was really my introduction to snorkeling (I don’t count the elementary school trip to the Keys) and made a water lover out of me.  We hit spots on all three gilis and we saw sea turtles, brilliant coral, and tons of crazy fish.  Even when we just snorkeled in the water straight out from our hotel on Gili Air, we saw some pretty cool fish and a big royal blue starfish.  (In 2013 we paid $2.50/day per set of snorkels and swim fins). 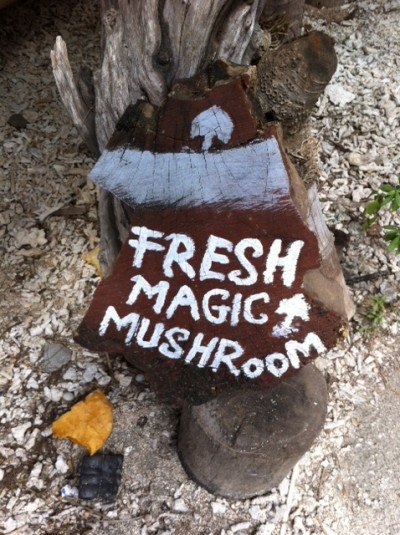 Gili Air is where we first encountered signs for “magic mushrooms.”  Yes, in a country with such strict punishments for drug smugglers,  psychedelic mushrooms are apparently legal* on Lombok.   (*That statement might not hold up in a court of law; caveat emptor.)  However, we didn’t encounter a big party scene; even on the nights when our hotel bar was hosting parties, it was still a relatively tame scene.  However, can we say that all the local bands we encountered on the gilis were AMAZING?  One evening I wasn’t sure if I was listening to a Bill Withers CD or a live band until we got closer (and yes, it was a band!)  And some of these slight wisps of Indonesian girls were belting it out like they were Merry Clayton, circa The Rolling Stones “Gimmee Shelter.”  And they loooove some Adele over there right now, just FYI.

We walked around the entire coast of island  in a couple hours; the west coast is, as of now, pretty undeveloped (save the ice cream man on his bicycle!), allowing a pleasant sunny walk along the water, flanked by palm trees groves, open fields, and plenty of healthy cows.

Gili Air is relaxed and offers up everything you might need on a stay in the gilis without being to isolated or too much; in my opinion, it’s the Goldilocks of the northwest gilis.