Pushkar ~ the land of camels, wheat, and late wives!

Greetings from Gwalior!  Our private tour arrived here tonight from Pushkar and we head off to Khajuraho tomorrow to explore the erotic temples.  Pushkar was a blast!  Last night we took a 3 hour camel trek through Pushkar city and into the desert surrounding the area.  One of my favorite parts was seeing the intensely green, lush crops of wheat, spinach, and other greens set against this stark sandy landscape.  And, truth be told, another one of my favorite parts of the camel trek was closing my eyes and really getting into the rhythm and sway of the animal (all while holding on tightly of course…have you seen how big a camel is recently?!)  Closing my eyes and feeling this ancient, organic cadence took me back to a time when people would travel for weeks and months on these beautiful “ships of the desert.”  Granted–3 hours was all about *I* could handle this go ’round, but still… 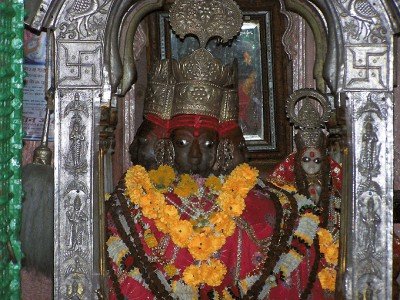 We explored the holy Pushkar Lake & its ghats, and checked out the Brahma Temple, as well.  I was looking forward to getting you some great pictures of it (at least the outside), but alas–no photography allowed.  However, someone craftier than me was able to snap a photo inside.  You can see the four faces of Brahma–the back face, courtesy of a mirror set against the rear wall.  The whole area where the Brahma statue is situated is silver-colored, and all the marble on the platform in inlaid with coins.  There is a room set off upstairs and to the left where there is a closed-circuit TV aimed at a temple on top of a nearby hill–apparently this is Brahma’s first wife’s abode.

The story (well–one of the stories) goes that Brahma was performing a ritual at Pushkar Lake and needed her to be there, but she was tardy for the party (waiting on her girlfriends) so he married someone else for the sake of the ritual.  Furious, she cursed him that he would never be worshipped…ever a softy, though, she reduced her curse and said, “OK, fine–you can have a temple in Pushkar. But Pushkar only!” And that is why there is one Brahma Temple and it’s located in Pushkar!

Much more to come as we head to Khajuraho and then… the Kumbh Mela!  We’ll leave you with some of my (Lauren’s) pictures from Pushkar. 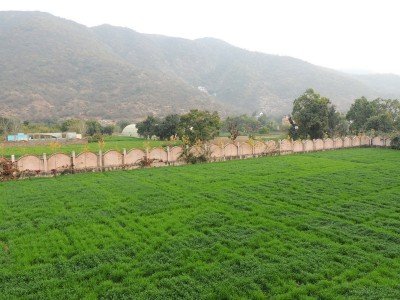 The greenest gardens (this is wheat) behind our hotel. 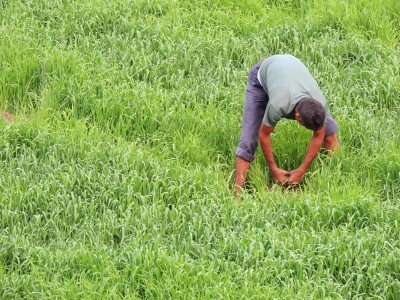 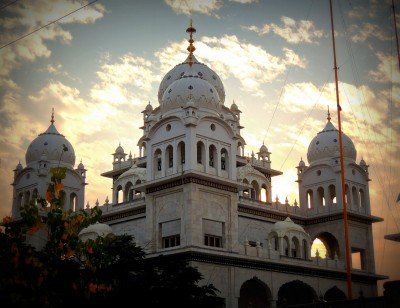 The Sikh temple in Pushkar

The holy Pushkar Lake at sunset. (Click to enlarge) 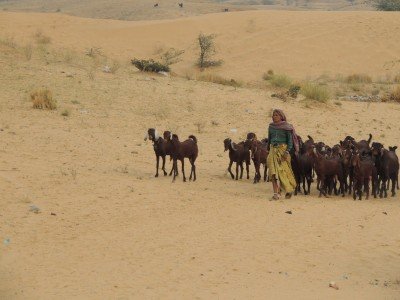 As seen during our camel trek. 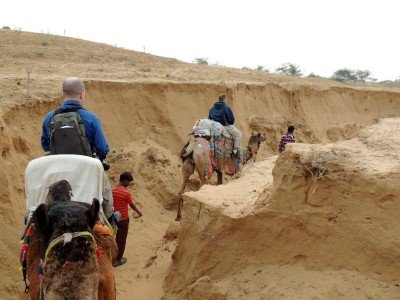 BJ & Sam on the camel trek.