Strange Food in a Strange Land

I happen to love the show Bizarre Foods with Andrew Zimmern.  He is funny, kind and very informative about so many countries and regions around the world.  I think, however, that while sparking an interest in traveling for some he scares many others away from overseas travel.  While talking about Andrew Zimmern, my mom told me the other day that she thinks she would have a hard time traveling because of all the strange foods.  I told her that the show is called Bizarre Foods and that he naturally focuses on, well…  bizarre foods.  I told her that food in most places around the world is tasty, but not all that different from going to a Thai or Indian restaurant here in the states.  I mentioned that Andrew Zimmern’s show now has more of a focus on bizarre foods in the United States.  I wondered if people who might watch the show overseas would be scared to visit the US due to their fear of having to eat Rocky Mountain Oysters or the like.

When traveling overseas  the food is part of the culture and is something you should try.  There will likely be things that you’ll really enjoy.  That said, just about anywhere in the world you’ll be able to find places that will serve pizza, french fries, and cheese sandwiches.  One should not avoid travel because of any fear of the food.  There will surely be something you will like and by no means is the show Bizarre Foods fully indicative of the food you’ll encounter–unless, that is, you want to seek it out. 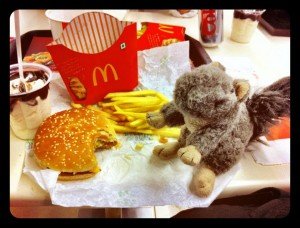 Our mascot Toby going all out in a Delhi McDonald’s.

I’m not a picky eater, per se, but I follow a mostly plant-based diet and I’m not always into trying “weird foods” simply due to a “When in Rome” attitude.   I put “weird foods” in quotes because one person’s weird is another person’s delicious.  And weird doesn’t always have to mean sheep brains, goat testicles, and fish eyes; some people think I’m weird for putting basil on peanut butter & jelly sandwiches.  I think BJ’s weird for putting ketchup on frozen burritos (was that a secret?).  Point is, food is a very important part of culture & comfort.

One of the biggest challenges for me as a physician is getting people to alter their diet.   So much of what we eat is reflective of our habits, our memories, widespread cultural connotations.  An example about cultural connontations: it’s my guess that 95% of people that make fun of tofu have never tried it, but it’s an American thing to bash it–it’s in our mainstream consciousness, in our sitcoms, in our comics. We equate tofu with a lifestyle, not just with lunch.

So, for all of these reasons and more, food is a very sacred subject.  Clearly I don’t think we should categorically dismiss a genre of food because it’s new and different to us; I think we should be grateful for the opportunity to step out of our culinary comfort zone.  However, that doesn’t mean I’m going to start munching on fried tarantulas simply because that’s what they do in the city I’m living in. (Edit: OK, So i tried fried tarantulas in Phnom Penh, Cambodia! Click here to see!)  And although you can inevitably appreciate the culture from a whole new perspective if you go “local” and dive right into the culinary habits, it doesn’t make you a lesser traveler if you don’t.

I’ve been around some travelers who pick on others if they dare order french fries (or, god forbid, pizza!) while in Punjab, an Indian state famous for its cuisine.  But sometimes at the end of the day, you need that comfort food and connection to home; after a busy blur of new sounds and sights and smells, sometimes a little french fry action can ground you.   In that vein, I haven’t eaten at McDonald’s in the United States in 13+ years, but it is one of my favorite places to visit in India. (Let’s forget the whole conundrum of globalization just for the sake of this blog entry, yes?)  Indian McDonald’s veggie burgers are done right–and don’t get me started on the fountain cokes made with real cane sugar instead of high fructose corn syrup.  It’s like revisiting my childhood Happy Meals, minus the Muppet Babies toys. 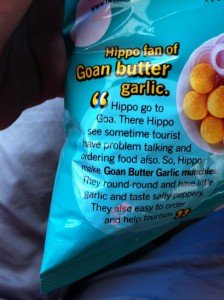 Would we give a visiting friend a hard time if they craved their culture’s food while here?  Do we get up in arms when we see Indian people in Indian restaurants in America?  Do we tell them to get with the program and go experience the true American dream of Chili’s, Applebee’s, and Outback Steakhouse?  Exactly.  So why do we feel it is verboten to order off the ‘Americanized’ menus overseas?  I’m not recommending sticking to that subsection of the menu for every meal; I can pretty much guarantee you’ll find something you like in the local fare–and, honestly, you’ll probably like everything.  Snack foods can be a fun way to enter into the realm of foreign cuisine if you’re especially skittish (if you can technically call cardamom-flavored oreos and masala cheetos “cuisine.”)

Yes, you can go the sheep brain route if you want. And yes, I might even try a tarantula leg when I’m in Cambodia (but no abdomen, I tells ya!).  However, if you order pizza or a grilled cheese overseas, I’m not going to throw you a side-eye.  Although I will tell you right now, Ladakhis and Americans have a very different definition of “mashed potatoes.”