We finally got to see the film Samsara today, director Ron Fricke’s follow up to 1992’s Baraka.  BJ had hoped for a follow-up film since he saw Baraka in 1996, and was delighted to learn that Baraka was being made several years ago. These films are non-verbal documentaries, with no plot or traditional storyline; instead, Fricke calls them “guided meditations.” In a nutshell, these larger-than-life images are always beautiful, sometimes difficult to watch, but always bring us closer to understanding what life is truly like on this crazy rock.

What excited us most today was how much Thiksey Monastery in Ladakh (India) was featured, both in the beginning and towards the end of the film. We were quiet and respectful of the other moviegoers in the theater, although we were both shouting in our heads, “There’s Chamba! And Jamyang!  And Tomchus, Norbu, Tandel, Samphel & Londhup!”  From the little monks running around the prayer wheel, to the conch blowers on the roof, to the red-robed lamas intently crafting the sand mandala, we got a wonderfully warm feeling to see our friends on the big screen (not to mention the absolutely stunning shots of the infamous Maitreya Buddha statue at Thiksey). 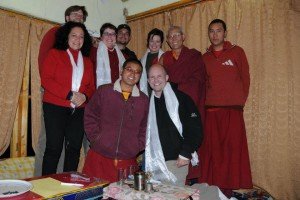 Ladakh is a magical place and there is no better home base than Thiksey Monastery (pronounced TICK-say).  BJ has been traveling to Ladakh for over 20 years and has made a second home at Thiksey. Even though we seem to have a routine there, seeing these images 20 feet tall on a movie screen reminded us of this region’s jaw-dropping beauty, as if seeing it for the first time.

One of our favorite things to do is to bring people to Ladakh and introduce them to the kindest culture, the warmest welcomes, and the most stunning visuals around, from the color-saturated Tibetan Buddhist iconography to the stoic and stately mountain ranges.  Because of our deep and rich history with the monastery & the lamas (monks), we spend time drinking tea and chatting in their homes, attending festivals & ceremonies, and having dinner with their families in the villages that spread out from the monastery.

Although we provide a variety of small group, all-inclusive tours each year, we can’t imagine a year will go by that we won’t visit our second home, Ladakh.  We would absolutely love for you to join us some day–check out our current trips to find out when your next opportunity is!