The idea of eating something called Grass Jelly, or Black Jelly, doesn’t give most American palates the “warm fuzzies,” whether it’s due to a cloying wheatgrass experience or from childhood culinary traumas with jello-mold cuisine. However, make no mistake: grass jelly is delicious! 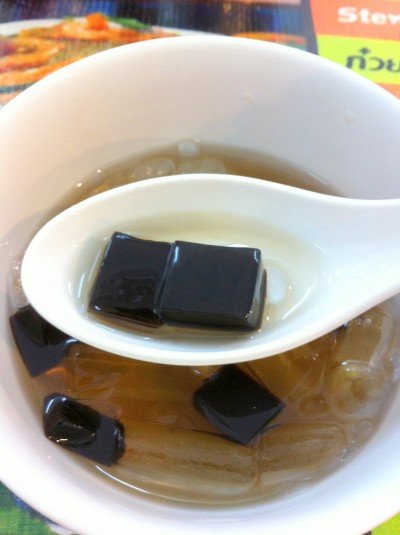 We tried it for the first time the other day because it was given to us as a dessert after a delicious lunch.  And you know the old saying, “Don’t look a gift bowl of ice-cubes, sugar water, and mysterious black chunks in the mouth.”  We tried it tentatively, not expecting it to essentially be a sweet, firmer, less-technicolor jello.  According to my wiki-sources, “grass jelly is made by boiling the aged stalks and leaves of the Mesona chinensis plant, a member of the mint family, with potassium carbonate for several hours with a little starch and then cooling the liquid to a jelly-like consistency.”  From there it can be cut into cubes or other shapes, used in place of tapioca pearls in “bubble” tea.  The way it was served to us, in sugared water with ice cubes, is also very common (and shockingly good!) This was the mysterious “jelly” in the ice kachang we discovered in Singapore. (The ice kachang we had at the Maxwell Road hawker center was shaved ice, fruit syrup, corn, red beans, jelly, and sweetened condensed milk.  It tastes much better than it reads!)

As a doctor and teacher of Chinese medicinal diets, I’ve been desperate to add some cooling foods into my regimen.  Fried tofu, fried noodles, and chilis are tasty and all, but I already run hot and when it’s 98 degrees out, my body needs a bit of a break.  Turns out that grass jelly is cooling, or “yin,” in nature (yin as opposed to “yang”).  Foods have their own thermal properties independent of what their actual temperature is; let’s use ginger as an example.  Have you ever sat down with a bag of candied ginger and just gone to town, then 20 minutes later found yourself sweating bullets?  That’s because ginger is heating.  Have you ever found yourself elbow deep in a refreshing watermelon when it’s hot as blazes out?  Watermelon has cooling properties (which are only enhanced by, and not caused by, serving it cold).  Many cultures have figured out ways to balance the temperature in their meals: the heat of Indian curries is tempered by cooling yogurt raita; spicy wasabi is put on cold-natured raw fish; cooling cucumber and mint tzatziki is used with grilled lamb, which is very hot in nature.  And as one of my students was very proud to point out, they serve celery (cooling) with hot wings.  So, not only is the grass jelly delicious and normally served cold (bonus), but the jelly itself will help to cool me down in this Thai heat.  Grass jelly, where have you been all my life?

[By the by, we stayed at a great B&B around the corner from here called Focal Local.  Cute rooms, top notch Thai breakfasts, delightful staff… check it out over at Agoda.com!]