What is a Gili? The Islands of Lombok 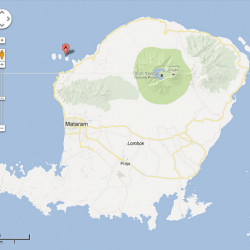 The northwest Gilis–Air, Meno, and Trawangan, from right to left.

We talk a lot about Gilis in our little family… Gili Air, Gili Asahan, Gili this, Gili that.  What the heck is a Gili?  (Pronounced “Gilly,” by the way.)

Gili is the Sasak word for “small island.”  What’s a Sasak, then?  The Sasak people are the native folks of Lombok, the large island to Bali’s immediate east.  Lombok is flanked by lots of gilis, but the most well-known and traveled are the 3 gilis to the islands northwest—Gili Air, Gili Meno, and Gili Trawangan.  [Since we’re giving a language lesson here, Air means ‘water,’ meno means ‘middle,’ and trawangan means ‘tunnel’ (terowangan), due to a tunnel being built on this island during the Japanese occupation in WWII.]

The gilis, particularly Trawangan or “Gili T,” have a reputation for already being over-touristed and essentially ruined. We were disappointed to hear this time and again, and we almost dreaded having to go there for our due diligence.  I’m here to tell you that assessment is dead wrong. It’s mostly a case of the “back in the day”-ers; you know, those people who always say stuff was better “back in the day.”  While not necessarily inaccurate, it doesn’t mean that the present day gilis aren’t astounding! 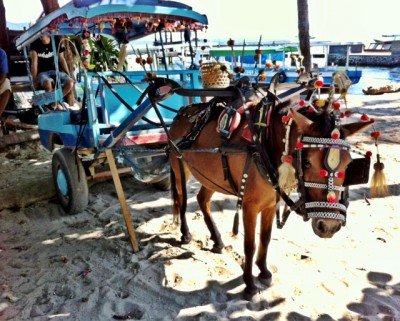 A horsecart of Gili T.

Yes, the gilis have more tourist infrastructure (restaurants, hotels, local tour companies) than anywhere else on Lombok.  But remember, as a tourist, that’s not a bad thing.   Yes, I have no doubt that the Gilis have suffered in some way due to the numbers of tourists visiting—just as Bali has, Key West has, and the Bahamas have.   But there are proactive forces on this island, including the Gili Eco Trust.  One cool project the Gili Eco Trust pioneered is BioRock, a method to regrow broken coral.  Read more about it at G.E.T.’s page here.

Are you ready for this?  There are no motorized vehicles on the islands.  Heck, I’m surprised there are even motorized blenders on the island (but thank god for that, as I am now addicted to blended lime juice drinks).  One gets around the small islands by foot, rented bicycle (which can be difficult on the mostly sand ‘roads’), or horse cart.  Yes, horse cart.  We preferred walking everywhere, or, as I always say, “jalan jalan!” 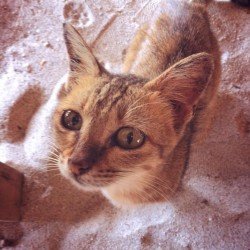 “I know for a fact you can spare a piece of fish.”

In addition to no vehicles, there are no dogs. Like, none. Now, you might know that hanging out with street dogs is a big part of my travel, but I didn’t miss them on the gilis–there were plenty of charismatic cats to fill that void.  Get used to a face like this staring up at you during mealtimes!

Wifi was available at many places on the Gilis, but can be quite spotty sometimes.  We has simPATI SIM cards (Telkomsel) in our smartphones and were able to get reception and [slow] internet access nearly everywhere we went.

Read about out experiences on each of the islands by clicking on the links below.  And if you’re in the mood for a more remote experience (infrastructure, shminfrastructre!), click here to read about our time on Gili Asahan, one of the southwest gilis, or “secret islands,” of Lombok. 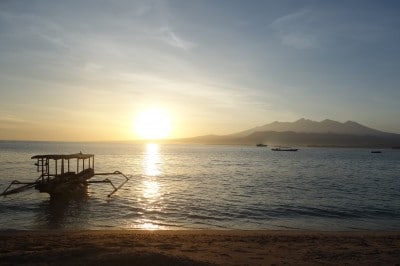 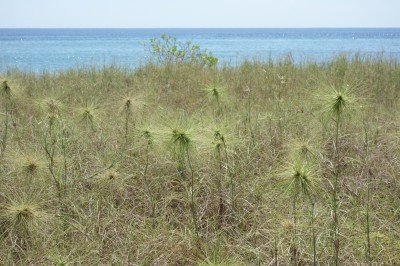 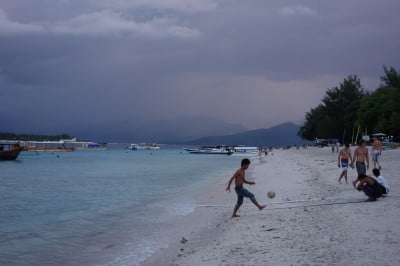 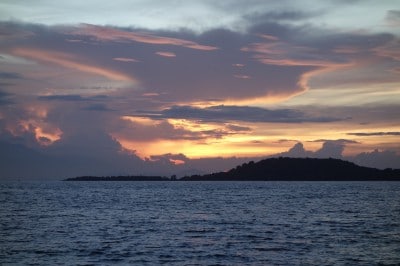